On Time is the first in a series of exhibitions exploring the artist’s essential question and themes of: time, light, space, absence, presence and the body in motion.  Roth is interested in how humankind structures and patterns our lives primally and specifically to our time. The idea of the essential question is a key concept of Roth’s painting mentor Al Loving, who she studied with at The City College of New York for her MFA in painting and photography.

The works from the Surface Series: Trinidad Sancti Spiritus, Cuba, New York City, Newburgh and San Juan in On Time reflect on the weathering of historic structures and regular buildings alike. For this exhibition, three early paintings were selected to accompany twenty-seven photographs from the Surface Series, including The Rape of the Sabines I, 1995, Untitled (Earth), 1995 and The Deep, 1989.

The UNESCO World Heritage Site of Trinidad, Sancti Spiritus, Cuba, was built on the back of the 19th-century sugar and slave trade. At its zenith, in 1827, one of the 56 sugar mills in the region harvested the biggest cane haul in the world — just under a million kilos of white pressed crystals. This enormous, conspicuous wealth shaped the town and no expense was spared in fashioning the finest Spanish colonial mansions, plazas and churches, which still stand testament to this era. Eighteen time-worn, weathered abstract fragments of surfaces of these buildings from Trinidad photographed in 2000 are included in this exhibition arranged in two grids of nine. Paired with these grids is the painting The Rape of the Sabines I, 1995, 120” x 66” inspired by Giambologna’s sculpture c. 1579 in Loggia dei Lanzi, Signoria Square, Florence.

The Deep, 1989, acrylic on canvas, 88” x 66” an homage to Jackson Pollock and Willem de Kooning, is paired with two digital photographs, Giclée  prints from the Appropriation Series 2017 in which the artist creates abstract digital imagery inspired from her early paintings. These works are a reflection on time and distance, from one’s own work, the rapid change in technology and process of documenting these works, and Richard Serra’s statement that “It takes a lifetime to become an artist.”

Untitled (Earth), 1995 acrylic on canvas, 80” x 67”  is paired with two diptychs of the surfaces of the UNESCO World Heritage Site of the Castillo San Felipe del Morro in San Juan. The Surface Series imagery is a reflection on the effects of nature on man-made structures over time, the idea of history repeating itself, and the knowledge that our egos and errors will be erased – that over time nature prevails.

On Time is on view at the Mindy Ross Gallery, SUNY Orange Newburgh, 1st Floor, Kaplan Hall, corner of Grand and First Streets from January 3 – March 9, 2018 with an opening reception on Newburgh Last Saturday, January 27, 2018 3-5:30 PM, Newburgh, NY and is sponsored by SUNY Orange Cultural Affairs (845) 341-4891. cultural@sunyorange.edu. www.sunyorange.edu/culturalaffairs. Free secure parking is available in the underground parking garage accessible at 73 First St. Regular gallery hours are 8am to 9pm Monday through Thursday and to 6pm on Fridays.

Walking Series I: Seasons Change is an exploration of nature's changing seasons over the course of a twelve month period during which the artist walked the same four and a half mile walk. All images were taken and edited with an iphone SE. The exhibition will be available online July 1, 2019. 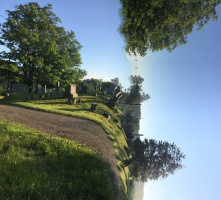 On Light: Twenty-Five Years of Photography

On Light is the second in a series of exhibitions exploring the artist’s essential question and themes of: time, light, space, absence, presence and the body in motion.  The images in On Light bring together over twenty-five years of the artist's photographic practice. The idea of the essential question is a key concept of Roth’s painting mentor Al Loving, who she studied with at The City College of New York for her MFA in painting and photography.